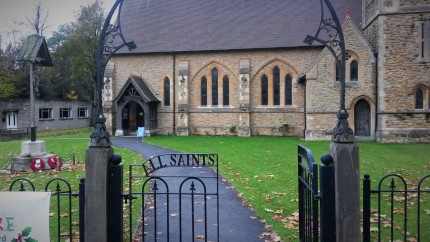 North Horsham Parish Council was honoured to be invited to lay a wreath on behalf of the community at All Saints’ Church, Crawley Road as part of the Remembrance Day Service on 13th November 2016. The brief service took place around the War Memorial in the grounds of the church.  Cllr Miss Alicia Smith, who joined the Council in September 2016, took part in the service and lay a wreath of red poppies on the Memorial. Cllr Miss Smith said that “it was an honour and privilege to represent the community and to lay the wreath on their behalf”.  The Parish Council would like to express appreciation to All Saints’ Church along with all of the churches in Roffey for their hard work on behalf of local people.

Last Thursday, Roffey Friendship Club were delighted to welcome A VERY SPECIAL GUEST to their fortnightly meeting – Amelia Knight, who is the Under 12 Irish Dance World Champion 2015.

Amelia came along and performed three dances – a Soft Shoe routine and two Heavy Reels with Hard Shoes – and was hugely appreciated by the twenty five or so people who were there. She looked absolutely stunning in her costume dress of red and gold …..

Amelia has previously won other huge national and international Championships and is hoping to retain her title in Brighton in 2016. She first saw Irish Dancing on the TV and was so enthralled that she began to go to classes.

She had a brief dabble with ballet but soon returned to Irish Dance. She trains at the Ace Academy in Broadfield, Crawley and the level of her commitment is illustrated by the amount of time she spends training each week – seven hours.

Club members were delighted that Amelia and her younger brother, James (a keen rugby player with Horsham Rugby Club), accompanied by their grandfather, took the time to go round and speak to everyone individually, so that she could answer all their questions.

Roffey Friendship Club was formed in September 2014, following a chance visit by a lady to the Parish Office who wanted a photocopy done of a letter. An hour and a half and a cup of tea later, between the lady and Parish Council staff, the idea of the Club was born, for ladies and gentlemen over 60.

The aim of the Club is to do what it says on the tin – to provide friendship and to help to alleviate the loneliness and isolation that sadly, some older people feel – and it’s growing from strength to strength.

The Club meets on alternate Thursdays from 2pm until about 4pm at Roffey Millennium Hall. Funding for the Club was kick started with a grant from North Horsham Parish Council and each session is charged at £2 per head for meeting costs with the balance going in the kitty for future outings.

For your money you get tea and delicious home-made cakes and on a couple of occasions we have offered a simple lunch. The entertainments range from quizzes, to horse racing, to Irish music sessions, to talks from outside organisations, such as Horsham Museum and the Fire Brigade, to a Tea Dance or to just sitting nattering and getting to know each other. The Club has been on a number of outings – to the Capital to see We’ll Meet Again, to the Bird of Prey Centre at Hilliers Nursery and last Christmas we took the Club out for a Christmas Lunch. Additional contributions to outing costs may be asked for but these are kept to within affordable limits. Transport is provided where necessary.

The next meeting is on Thursday 17th September at 2pm and you can just turn up and be sure of a warm and friendly welcome. If you would like to know more, do give Nikki a ring at the North Horsham Parish Council Office at Roffey Millennium Hall on 01403 750786 or pop in and see her …..

The purpose of the meeting is to give local residents the opportunity to voice their opinions on the Airports Commission current consultation, and the proposed second runway at Gatwick Airport.

CAGNE, (Communities Against Gatwick Noise and Emissions) was founded out of the ADNID trial flight path that went over West Sussex parishes not previously disturbed by aircraft noise.  CAGNE now seeks to share information with residents of West Sussex about Gatwick Airport, Gatwick flight paths and Gatwick expanding with a second runway.

The Airport Commission has been set the task to find a new runway in the southeast. Gatwick is being considered and if you object to a second runway being built you should write to your local MP, HDC and WSCC councillors, and the Airport Commission.

The questions asked by the Airport Commission are in depth and have to be answered by 3rd February 2015.  It is not detailed that the associated documents contain important details, such as the two new flight paths that will go over the Horsham area whilst the existing routes will certainly double in aircraft capacity as Gatwick seeks to go from 250,000 aircraft a year to 560,000.

Gatwick will be bigger than Heathrow with 95 million passengers annually and over 32,500 inwardly migrating workers looking for housing, schools, medical care and adding to the congestion on our roads and railways.

The consultation documents can be found below:

The map attached shows just two of the new flight paths that will come off a new runway at Gatwick and the noise implications for departures over West Sussex.  Other maps for other areas and arrivals are currently under construction and addition information can be found at www.cagne.org

The Parish Council, at its recent Special Meeting of Full Council held on 14th October, formally approved its submission to the Examination in Public of the Horsham District Council’s Planning Framework.

The Examination in public, which will be held in the Council Chamber in Horsham District Council’s Offices and begins on Tuesday 4th November 2014 at 10am, will be attended by various Parish Councillors where possible.